skip to main | skip to sidebar

Day 1 - New Carlisle IN to Schererville IN 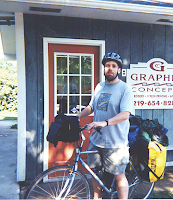 Monday June 11, 2001, 65 miles (105 km) - Total so far: 65 miles (105 km) Started from home at around 8:30a.m., made a stop at our friends the Kryzwicki's on the way out. Stopped at Michigan City beach area for lunch. Met Dean Bender - 75-year-old bicycler, Chicago native, great speaking voice. Stopped at about 5:00 p.m. for the day. Sunburn on my face. Camped at Legion Post 485 near Shererville Indiana. Asked a couple in the parking lot about setting up a tent for the night one of them took me inside and the barmaid made a call to the post commander for permission. Nice spot under large oaks out of view from road.

Day 2 - Shererville IN to Morris IL 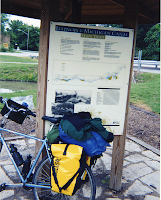 12:15 p.m. - another flat tire, picked some glass out of the tire this time. 6:30 p.m. stopped at Gebhard Woods State Park approximately 1-mile west of Morris IL

Stopped to ask directions to the Hennepin Canal trail in the small town of Wyanet IL, very nice couple almost forced me to drink lemonade, talked for a long time, he had been to the IN/Tek site and to my hometown of New Carlisle before. It is very heartening to be treated so nicely by total strangers. Hot again, 94 degrees today. Stopped at the Hennepin Canal visitor's center, there were no people in sight so I set up to camp under a picnic shelter. A ranger making his rounds came by and told me that the Park does not allow camping. I told him I was just drying gear. Nice fellow, I think he felt bad for having to enforce the rules. Apparently unlike the I & M canal trail which has quite a few trailside camp-areas, camping is not allowed anywhere along this trail. I packed up my gear & returned after dark. Early start next day - on road by 5:00 a.m.

Thursday June 14, 2001, 87 miles (140 km) - Total so far: 285 miles (459 km)Rode along the Hennepin canal towpath west for a few miles until the trail went into an area that was under construction, It was rough going through tall grass and areas of rutted dirt. Decided to follow the local roads, good wind with me today & good roads in this part of Illinois, with light traffic. Stopped for breakfast in Erie IL at Russ's café, place pointed out to me by another bicycler out for some morning exercise. Looked like all retired farmers inside, not a friendly group here. Made Albany IL at 11:00 p.m., Fulton at noon just after I ran into the great river trail.

At Fulton I rode the bridge over the Mississippi River into the town of Clinton Iowa, mostly just so I could say I rode as far as Iowa. Made a visit to the drugstore to look for something to relieve the swelling around my eyes, which was probably due to a combination of a reaction to pollen and all the dust from the road - not to mention the constant flow of sweat and the sunburn. Thus far everyone I have met seems astonished to hear that I've rode my bicycle from Indiana. This has come as a surprise to me, before I started I expected to meet many people traveling by bicycle, and people along the Grand Illinois Trail that were accustomed to it. I have not seen one other person that I would qualify as being on a loaded tour as of yet. Crossed bridge into Savannah IL stopped at McDonalds for lunch and avoided a brief downpour. After lunch followed route through downtown, attractive district here. The terrain changes just out of town, Hills and Bluffs along the river road, beautiful. This is why I do this! Stopped at Mississippi Palisades State Park around 4:00 p.m., gave up $8 for a campsite, but they have showers here, I took two. Most of the day I rode in +90 degree temperatures until the rain cooled it off to around 80 degrees, rain blew in again around 7:30 p.m. and I settled in the tent for the night.

Reached Galena Illinois near 12:30 p.m., weather has cleared now, spent some time site seeing, a beautiful, rich historic area Galena has. Rode out east from town at around 3:30 p.m. on the on my way towards home part of the loop now. Took the stagecoach trail road with the destination of Apple River Canyon State Park in mind. Reached the town of Apple Valley IL and noticed some resistance pedaling and a rubbing sound from my back wheel, found the problem to be a broken weld on the rack support. Fixed it up with by wrapping wire around the break then duct tape to hold the wire. The weather is terrific now, a cool 70 degrees, big fluffy clouds, and the wind has turned to help push me east now. Asked a couple people about getting permission to camp somewhere. A town park was recommended to me and when I found it there was a baseball game in progress. I asked a lady working the concession stand about camping, and she indicated there was no one to give approval to camp and thought no one would mind. The park was right on the Illinois - Wisconsin State line, chalked up a visit to one more state..

Saturday June 16, 2001, 108 miles (174 km) - Total so far: 448 miles (721 km)Left Apple Valley at around 7:00 a.m. - Cool and Sunny today! Went by Apple River Canyon S.P. shortly after and went for a short hike on a trail that ended up running up close to the park campground. I rode the county "backroads" paralleling U.S. 20 till I reached Lena IL, ate a good breakfast, nice farm town. Good tailwind made Freeport IL close to noon. Went into a library downtown to look up info on the Pecatonia Prairie path. Apparently it is still under development, I stopped a bicycle shop and nobody knew anything of it there either. After searching for a trailhead I headed out of town on a county road, got my bearings and decided to follow the "backroads" bypassing Rockford IL angling Southeast along S.R. 72 towards Elgin IL. Stopped for the night at Russell Woods Forest Preserve.

Sunday June 17, 2001, 65 miles (105 km) - Trip Total: 513 miles (826 km)
Left Russell Woods around 6:30 a.m. made south Elgin at 9:00 a.m. Picked up the Fox River Trail off of the U.S. 31 bridge. Lots of people riding, not to many were friendly. Followed the trail to Batavia where I stopped at McDonalds for some breakfast. Talked to a group of bicyclers there, they recommended that I not follow the trail to Aurora but take the prairie path branch to Warrenville road. I noticed he rack rubbing on the back wheel again. Rack support weld is broke on the other side, fixed this in the same manner. I took the Warrenville road route until I happened upon a trail that ran south. Followed a paved trail, it took me under I88 then it turned to a dirt path. I followed a fork that put me in the woods alongside a stream, it was rough, at one point I had to lay my bike on the ground and pull it under some trees that had blown down and were crossing the path. It came out on a busy highway, which I followed into Naperville. South side of town I noticed the gear rack rubbing the back wheel again. Rack is shot! The remaining supports are bent. Made a call home and my wife and father drove in to pick me up.

Primarily low traffic paved county roads made up the route, secondarily state highways, with 31% of the trip length being on improved trails.. A mile or 2 was ridden on gravel roads, and a few miles were pedaled off road in the grass or on dirt paths.
Home
Subscribe to: Posts (Atom)